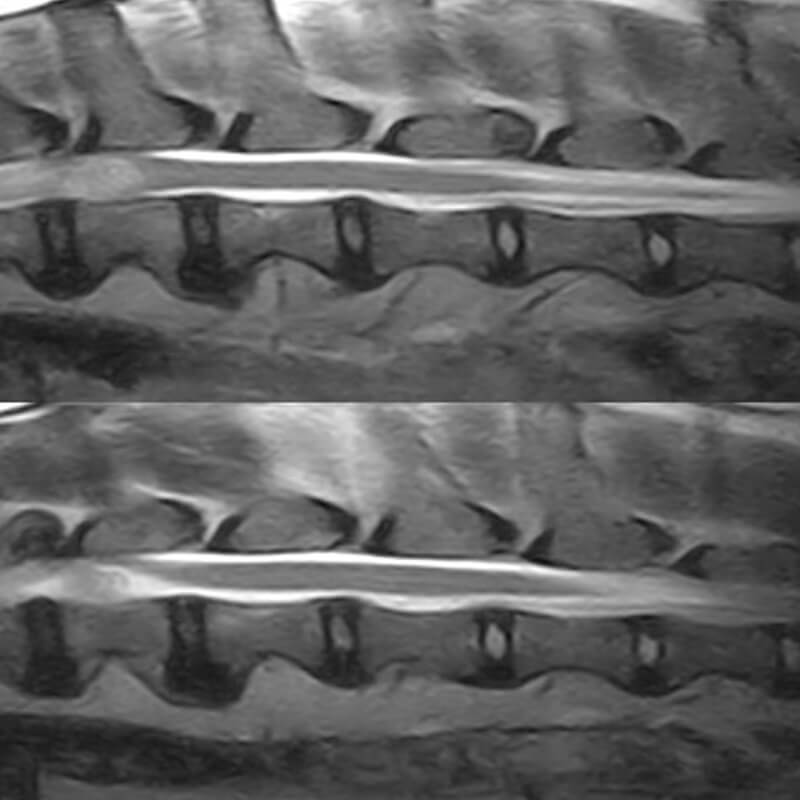 In the T2 weighted images all included discs show a varying degree of signal loss of the nucleus pulposus. A moderate to severe degree of spondylosis is located at the TL junction and the first three lumbar vertebrae. An approx. 2cm long mass is present to the L of the spinal cord at the level of L2. At the level of the intervertebral foramen L1/2 it causes compression and displacement of the spinal cord to the right. Centrally over L2 the spinal cord is completely abnormal. The transverse images do not indicate if the spinal cord is completely infiltrated or merely severely displaced and compressed. On the T2 weighted dorsal image a “Golf-T sign”, which represents widening of the subarachnoid space, is present cranial and caudal to the lesion. In the T2 weighted images the mass is of heterogeneous hyperintensity, in the T1 weighted images it is hypointense with strong enhancement. A thin structure without contrast enhancement is evident ventral and to the R of L2; its signal intensity is that of the normal spinal cord.

On the sagittal views only part of the LS junction is included. The LS disc appears to protrude moderately into the spinal canal, replacing the ventral epidural fat so that it comes into contact with the cauda equine.

The list of differential diagnoses includes peripheral nerve sheath tumor, lymphoma, malignant histiocytic sarcoma and meningioma. However, the appearance is not typical for the last three tumor types. Localisation and behavior of the mass also fit the diagnosis of neuroblastoma; however, clinical signs generally begin to show between the first and third year of life. In case the tumor is slow growing, the onset of clinical signs can be delayed until later in life.

During surgery the tumor was intradurally located and had a greasy, friable consistency. Only a partial resection was possible.

The histological diagnosis was atypical meningioma (Grade II WHO).

Two weeks post operatively “Gizmo” had improved significantly and could walk without signs of paraparesis.

END_OF_DOCUMENT_TOKEN_TO_BE_REPLACED 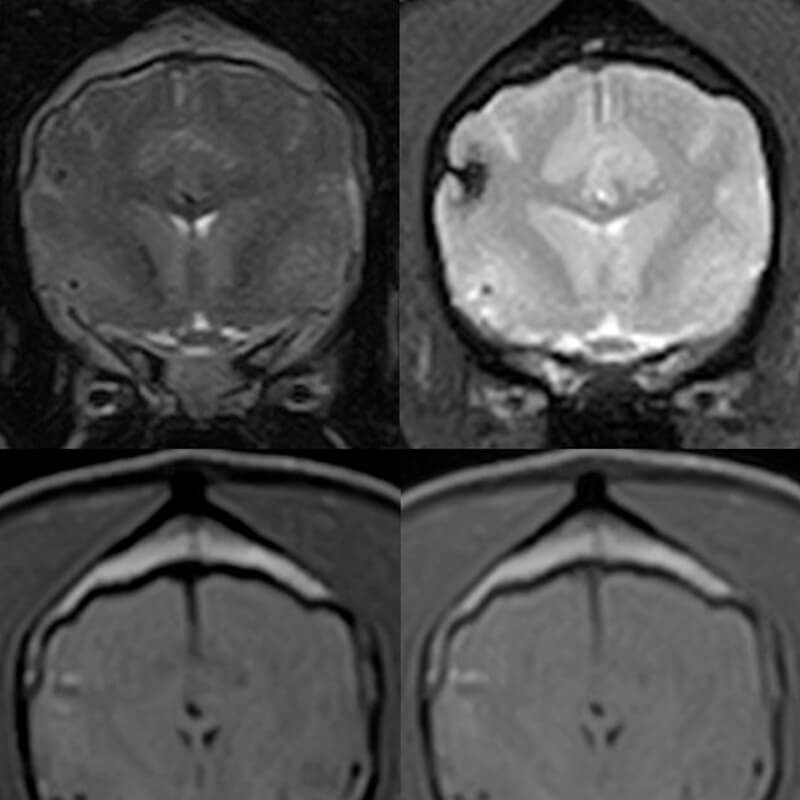 The following sequences are available:

A focal, approx. 0.5cm large, intraaxial lesion is present in the grey matter of the suprasylvian gyrus of the right temporal lobe. Centrally the lesion is hypointense on T1w, T2w and FLAIR images. Peripherally a thin, hypointense rim is visible. On the T2* weighted images a large signal void due to a susceptibility artefact is present.

There are no signs of a mass effect. No significant contrast medium uptake is present.

The suceptibility artefact is indicative for the presence of haemorrhage.

The most common cause for primary intraaxial bleeding is an amyloidangiopathy. Amyloidangiopathy represents perivascular accumulation of hemosiderin and generally appears as multiple very small, pin point changes. Another cause for primary intraaxial bleeding is a spontaneous rupture of vessels due to systemic hypertension, e.g in case of chronic renal disease.

Haemorrhagic infarcts in dogs are rare, compared to humans.

Owing to the fact that in this case a single lesion with a relatively large susceptibility artefact is present, bleeding secondary to an infection with Angiostrongylus vasorum is considered the most likely diagnosis.

Furth differential diagnoses include systemic hypertension and coagulopathy. Vascular neoplasia and malformations are rare and therefore considered less likely but cannot be ruled out completely.

Due to the lack of contrast enhancement and the absence of peripheral oedema a brain metastasis is unlikely. Trauma associated bleeding can be excluded as no trauma was reported in the history and there are no changes in the overlying musculature which indicate previous trauma.

The dog was dewormed.

Under therapy with anticonvulsant drugs seizuring was reduced and eventually ceased.